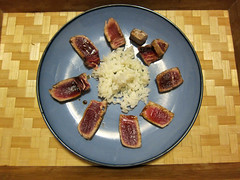 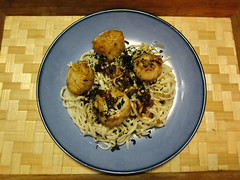 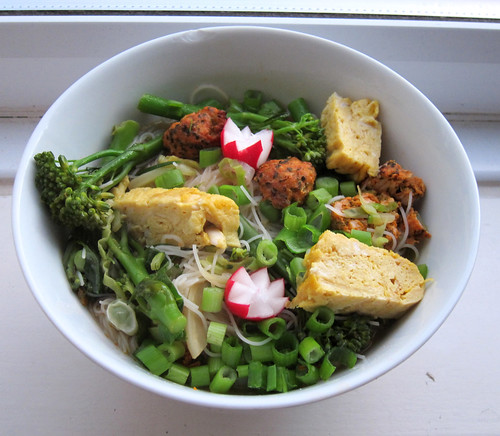 My first attempt at making tamagoyaki, a multiply-folded, very thin Japanese omelet that's lovely as part of a bento or in a noodle dish.

This one was rice stick noodles, spicy chicken dumplings, miso soup base and various veg.

[cross-posted from my journal, so that looks a bit livelier...]

Today I made dressing for the first time - the kind that goes with roast turkey and all that good stuff. For all the cooking I've done, especially all the Thanksgiving dinners I've helped make, it's kind of surprising I hadn't made this before (other than Stove-Top).

I had half a loaf of homemade bread to use up this weekend, and didn't feel like making french toast again, so I figured what the hell. I figured it would be good with pork chops, and I've never quite liked the "stuffed pork chops" I get at the store, even the good grocery stores. So I added a bunch of onion, thyme and purple sage from the garden, sauteed that in butter I'd made this morning, a big handful of Craisins, and tossed in a big handful of cashews at the end (no chopped dates on hand, or I'd have thrown some of those in too). Rather fantastic, for a first attempt! I've now resolved there shall be no more Stove-Top except in the rare case of emergencies. And I can't immediately think of what might constitute a Stove-Top sort of emergency.


A rough sort of recipe

about 1/2 tbsp butter
about one cup of onion, minced
about 3-5 little branches of thyme (probably a total of 4 inches total length), cut into little pieces
about 2-4 purple sage leaves, cut into little pieces
1 1/2 cups chicken stock
big handful of Craisins
smaller handful of chopped, rolled dates (I wish I'd had these today!)
About 5 cups of bread pieces - I used half a loaf, sliced, dried out, then torn into small pieces, and put it into a large casserole dish.
big handful of cashews

preheat oven at about 400F. melt butter in large frying pan. sautee onion and herbs until soft. add the Craisins & dates. add the chicken stock and stir just long enough to heat through. pour all over the bread pieces. toss till coated. add cashews, toss to mix the cashews in. bake about 20 minutes or so.

I'd thought the amount of chicken stock for how little bread I actually had would be too much, but I think next time I might add even more. Or bake it at a lower temperature. I'm definitely glad I didn't have it in the oven broiling along with the pork chops.

When I make a familiar, but not yet memorized recipe, I never think to look all the way through the recipe before I start mixing things. Which means, like today, I forget to make 'buttermilk' for the biscuits till I'm already done mixing everything else. Of course today I didn't have either milk or lemon juice, both of which I usually use for the 'buttermilk' substitute. I decided to plow ahead, mixing heavy cream and rice wine vinegar. I used probably twice as much of the rice wine vinegar as I would have the lemon juice (and I used the rice wine variety instead of white vinegar because I think the white vinegar is too starkly "vinegar" tasting with no other flavors to it). The biscuits came out wonderfully! There was a slight vinegar taste to the dough, which I didn't find the least bit objectionable, and I didn't notice any vinegar taste in the finished product. 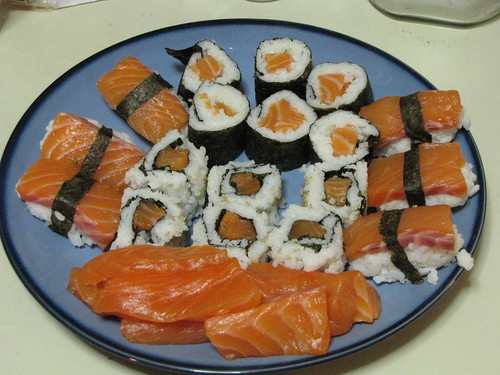 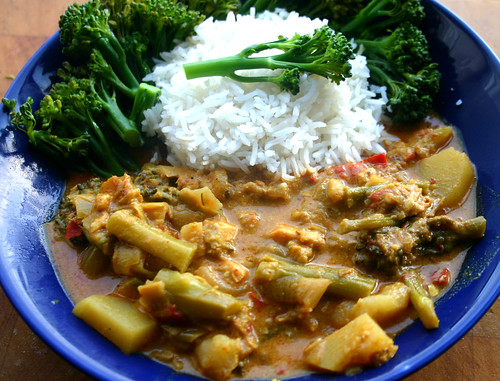 Fish curry with potato, tenderstem broccoli, leek, onion and peppers. Basmati rice.
The curry spice was from a bought paste, jazzed up with sweet chili sauce, garlic and a few kaffir lime leaves.
I used salmon and cod, as that was what was in the freezer, but any large-flake fish will do.

Tenderstem broccoli is my current favorite - it's even nicer than the purple sprouting stuff broccoli I've had recently. 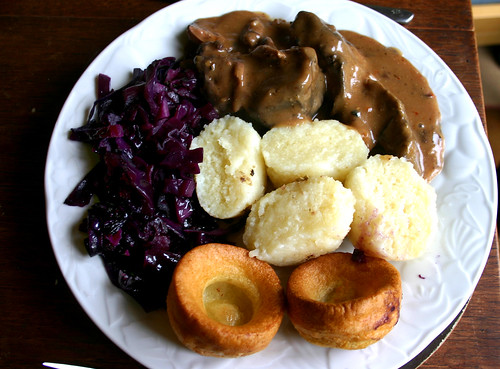 Leg of lamb - after, originally uploaded by Semioticghosts.

I tried to re-create my dad's recipe for slow-roast leg of lamb.

The leg of lamb, which I trimmed to remove the skin and all fat I could easily get to. I made slits in it which were stuffed with slivers of garlic and a few rosemary leaves each. The bulk of the rosemary is in the tied leek leaf, because I was too lazy to chop the rosemary and this lets all the flavour in, too. The casserole was filled with half a bottle of wine (has to come up halfway up whatever meat you are braising), a few roughly chopped shallots and a four large cloves of garlic. I smeared the lamb all over with Dijon mustard before dropping it into the pot.
(If you click on the picture, it will take you to my flickr, where you can see the roast in its starting out stage by clicking on the previous picture link.)
The red cabbage was braised/steamed until softened with salt, pepper, a little olive oil, apple slices, cloves and cardamom, with a splash of water and a splash of red wine vinegar as the liquid.

This image is of the leg of lamb, pulled apart and in gravy made from its juices with half a bottle of red wine, a glug of cream, the shallots & garlic and seasoning.
German potato dumplings (boil in the bag I'm afraid), mini Yorkshire puddings and homemade red cabbage with cloves, cardamom, apples and red vine vinegar.

The leg, which weighed about 1.800 kilos was roasted on 140 degrees for two hours in a lidded casserole in a fan assisted oven and then roasted for another hour on 120 degrees. It turned out incredibly tender and remained juicy.

What's happening in your kitchens, folks? [cross-posted to my journal]</p> 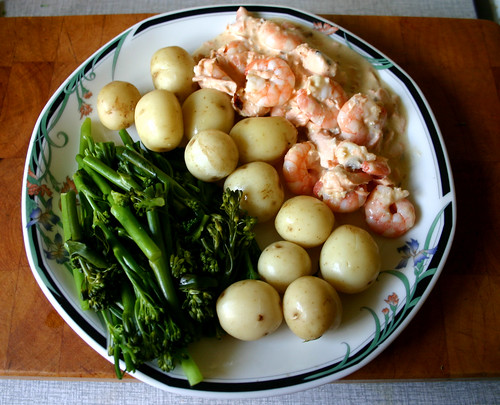 Normally, I'd post a recipe - but this was sufficiently effortless not to require one - the broccoli was steamed over the potatoes and the salmon was pan friend briefly in lime flavoured olive oil before king prawns and sauce hollandaise were added and warmed through.

(will be cross-posted to my journal)

I've been fooling around with applesauce formulations recently. Here's the latest winner:


Core, peel and chop pears and apples into 1" cubes or so. Put in a large-ish pot with water to cook. I really don't know how much water because I do it differently every time. Basically, enough water to get the fruit cooking without burning while also doing laundry and dishes while you're waiting for the fruit to cook. I cook best when I multitask. I also cook most of the water back off.
When the fruit is mushy, add the Craisins. Let sit for a few minutes so the Craisins have time to absorb liquid. Then squash it all with a potato masher. Mash it as smooth or chunky as you like it. Then add the spices. Add sugar to taste. Keep the heat on long enough for the sugar to melt into the fruit mash and to cook off as much water as you like.

Serve warm or cold. Refrigerate any leftovers for a week or so.

a couple of weeks ago i made a pot roast in my crock pot.
i had no idea how this would go over with my family, but i'd found a recipe that sounded delicious and simple and since i was working at the temp job, i wanted to come home to a hot meal.
so i put it together, ran to work, called home to get the kids to make a pot of barley, and voila.

what i did not expect was that it was SO good, i could have served it at a ... holy hell, batman, i can't remember how to spell restaurant. dang, that was weird. had to look it up! lost that first "a." reminds me that once, in college, i was taking a final exam and forgot how to spell the word "what." the "h" eluded me.

so anyway, that pot roast got rave reviews even from my rob, who dislikes beef. elmo couldn't stop talking about it, and when i made soup out of the last of the leftovers, he went all crazy yummy over that, too.

i took a typical hunk of pot roast (what is that? round? shoulder? something.) and floured it and browned it in a little garlic olive oil. i put one can of cream of mushroom soup in an oven bag in the crockpot, threw a packet of onion soup mix on top, and put half a cup of water in the hot pan to get the browned bits out and threw that in. i know it sounds very 1950s but it really was good.

the thing is, it made a real gravy instead of that eewwwy water that sometimes comes out of having a crock pot meal. the flour and the little bit of water collaborated with the soup. so. that's my dinner. i smells it.
Collapse